The dharma, represented by the dog in this story is the representation of the only way a person can attain peace. And within this story, the path is found through righteousness not because of what Yudhisthira will attain but because of the intrinsic value of doing what was right.

This begs the question of whether we do good things because of what we feel it will bring us: appreciation or reward.
gallery
Yudhisthira finally stood at Indra's chariot. Indra loomed over Yudhisthira - a noble and skilled man - and his trusty companion, an ugly dog that had joined him one day on his trek while he was resting under a tree, alone and tired. He had lost his brothers on the journey - one by one they died - from starvation, the bone chillingly cold nights and the brutality of the heat during the day. One by one they were taken from him. It was when his last brother perished that he found himself at his lowest, under that lonely tree, when the dog appeared to him and never left.

They had been searching for Indra's chariot on that mountain to take them the final way to the gates of heaven. Yudhisthira and his brothers had heard finding this place, this paradise, would bring them peace. They were brave men and many believed they could make the journey through the treacherous mountains but in the end it was Yudhisthira alone, with his trusted dog, had made it.

Together he and the dog had passed over jagged rocks that cut them, hot sand that burned, painful thorns from unwelcoming bushes, and deep mud that threatened to suck them in and not let them go. When they found food - sometimes Yudhisthira finding it, sometimes the dog – they always shared it. When neither found food, they starved together. And as sometimes only loneliness can bring to two creatures, it brought Yudhisthira and his dog love. He trusted the dog with his life.

His dog was looking up at him and he patted his head. They had finally made it to the place they were searching, and Indra's voice bellowed out to him, “oh, you finally arrived! I have been waiting for you so long! It's a pleasure to have you here in my chariot, let's fly to heaven.”

Yudhisthira and his dog took a few steps toward the chariot when Indra raised a hand, “But... the dog can't come, look at it, it's old and thin. It's not worthy of my heaven.”

His dog stopped and Yudhisthira looked down at him. The dog laid down at Yudhisthira's side, resting its head on his cracked paws. Yudhisthira looked back up at Indra, “I'm sorry, if the dog can't come with me, we will turn around and go back now. I thank you for your invitation, but I cannot leave this animal. He has been my faithful companion during this journey.”

Yudhisthira headed back down the mountain, the long arduous path they had just come.

Yudhisthira turned and discovered not his dog on the ground where it had been, but the dog transformed back into its real shape: the God Dharma.

“Now you can come, this was your final test and you showed that you deserve to come with me.” Indra opened the doors to the chariot and Yudhisthira stepped in. Indra closed the door and off they went. 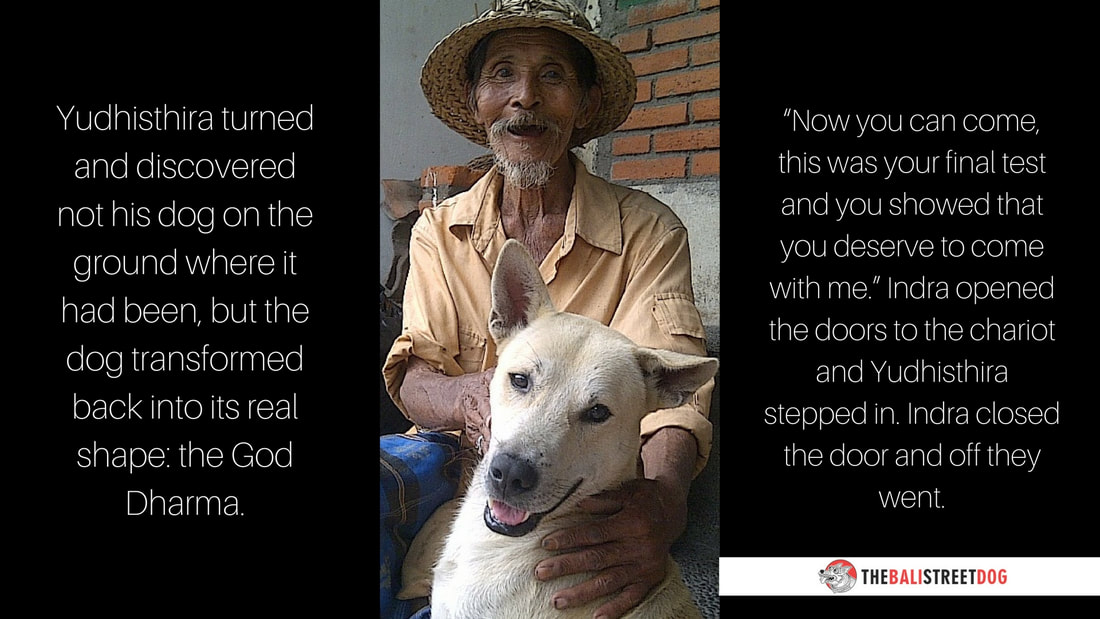